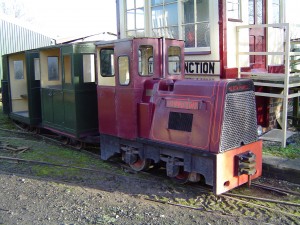 The railway consists of a 600 yard circuit around the museum grounds.  We currently have a steam tram and eight industrial diesel locomotives, together with a further two on loan from the Narrow Gauge Railway Museum in Tywyn, Wales.

The passenger train carriages were recently acquired from the former Abbey Light Railway in Leeds, which closed in 2013.  The original carriages are in store.

The wagon fleet has been collected over the years from many sources.  Some have been converted to new uses, such as our original coaches, but we have retained at least one example of each in its original form.

The signal box at Pear Tree Junction was recovered from Holmes Yard at Lincoln, where it was latterly in use as a paraffin store. The lever frame is from the former Skellingthorpe box near Lincoln.